The LORD blessed us with nice weather on both trips. Even though it was raining pretty hard this past Saturday morning (April 9th), by the time we got on the road the sun had come out, and we were able to enjoy a beautiful drive.

We had a good time of fellowship both weekends with the pastor (who also happens to be my uncle) Bro. Morris Bryant. I preached at ‘Liberty Tabernacle‘ on Sunday morning the first weekend, and Philip (our oldest son) helped me sing a special.

The second weekend Bro. Trevor, his wife (Sis. Anna May), and children (Zion, Azariah, and Glorianna) joined us for the weekend trip to Liberty. We were able to relax, and enjoy the beautiful weather on Saturday while we watched the children play, and I lost a few games of ‘corn toss‘.

Bro. Trevor preached at ‘Liberty Tabernacle‘ on Sunday morning, and his wife and children joined him to sing a special. My cousin (Bro. Richie Keith) sang a special, and played the bass guitar while I led songs during the worship service.

Since I will be preaching in Blades, DE next weekend (LORD willing), and Bro. Trevor is going to be preaching in Townville, SC the following weekend, he went ahead and gave me an early birthday present while we were together in Liberty.  Part of the present was an original copy of the November 1952 Reader’s Digest that I certainly appreciated because that issue has ‘The Healing of Donny Morton’ article Bro. Branham refers to many times.

53-0608A  DEMONOLOGY PHYSICAL REALM
How many read the November issue, that article of mine in there on “Reader’s Digest?” See? And they had me up there to interview that baby they give up. Said, “It couldn’t be done.” But the Holy Spirit spoke to me and told me how it would be done, and it was done.

After enjoying the time of fellowship with friends & family it was time to say our goodbyes, and head home again. We certainly appreciate all of the kindness and hospitality that Bro. Morris, and the brothers and sisters at ‘Liberty Tabernacle‘ showed us over both weekends. 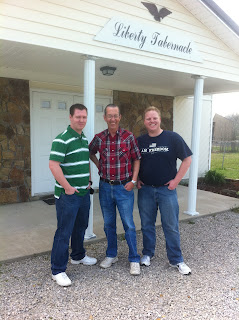 If you are not familiar with the ministry of Rev. William Marrion Branham we invite you to listen to his Life Story (the link has the audio available in multiple languages), and hear the incredible testimonies of how God moved in the life of His humble servant from Kentucky who’s ministry is still encouraging believers around the world.

If you are familiar with Bro. Branham’s ministry I’m sure you would enjoy revisiting the familiar heart-stirring stories from his life again.

April 6, 2011 Bro. Nathan Bryant Brother Nathan, Quotes No comments
102 years ago today
God sent a love gift to earth
To fulfill prophecy, and restore all things.
“But in the days of the voice of the seventh angel, when he shall begin to sound, the mystery of God should be finished, as he hath declared to his servants the prophets.” (Revelation 10:7)

“And Jesus answered and said unto them, Elias truly shall first come, and restore all things.” (Matthew 17:11)

“Behold, I will send you Elijah the prophet before the coming of the great and dreadful day of the LORD” (Malachi 4:5)

HOW THE ANGEL CAME TO ME AND HIS COMMISSION (55-0117)
And she said, “Now, these three wise men came.” And said, “When they three stars, when they… They come from different directions and they met at Bethlehem. And they said they found out and consulted, and one was from the lineage of Ham, Shem, and Japheth, the three sons of Noah.” And she said, “Then they come and worshipped the Lord Jesus Christ.” And said, “When they departed,” said, “they brought gifts and put to Him.”
And said, “Jesus Christ said in His ministry that when this Gospel has been preached to all the world (Ham, Shem, and Japheth’s people), then He would come again.” And she said, “Now, those planets, heavenly planets, as they move around…” Said, “They separated. They’ve never been on the earth since, known. But” said “every so many hundred years, they cross their cycles like this.” If there happen to be an astronomer here, you might know what she was talking about. I don’t. So when she was talk-… Said, “They cross like that.” And said, “In commemoration of the greatest Gift that was ever given to mankind, when God gave His Son. When these planets cross themselves again, why,” said, “He sends another gift to the earth.” And said, “You were born on the crossing of that time.” And said, “That’s the reason I knew it.“
IS THIS THE SIGN OF THE END SIR? (62-1230E)
This Magi said to me, “You’ll never be successful in the East.” Said, “You were born under a sign.” And said, “You… That sign, that constellation, when they crossed, way out in there, the day of your birth, they were hanging westward. And you must go westward.”
WHAT IS THE ATTRACTION ON THE MOUNTAIN (65-0725E)
That’s what the attraction is. The predestinated Seed of God who can’t do nothing else but follow It, means more than life to us. Take our lives, but you don’t take That. What is the attraction? God, as usual, fulfilling His Word.
WHAT IS THE ATTRACTION ON THE MOUNTAIN (65-0725E)
What is this Light up on Sunset Mountain in the Coronado Forest of Arizona? What is this strange thing that happened up there, that the people has been driving east from west, picking up the rocks that laid around there where It struck? And every one of them, every one rock, has three corners on it, that It tore off. (The three are One.) They’re laying on desks, on paperweights, across the nation. What is this strange thing upon Sunset Mountain in the Coronado Forest?
Junior Jackson listening in, you remember the dream he had that I interpreted, “going towards the setting of the sun”? And this happened on “Sunset” Mountain. It’s the evening time, sunset time. The sunset Message through a setting of history, a setting of prophecy, rather, being fulfilled. And it shall be Light at the evening time, upon Sunset Mountain in the Coronado Forest, forty miles north of Tucson.