Pope To Resign On 50th Anniversary Of Cloud Picture

Pope Benedict XVI has announced that he will be resigning on February 28th. This is the first time a pope has resigned in 600 years. That date will also mark the 50th anniversary of “The Attraction On The Mountain”.

According to the May 17th, 1963 issue of Life Magazine: February 28th, 1963 was the date that the cloud picture was photographed.

Signs of the times are everywhere… 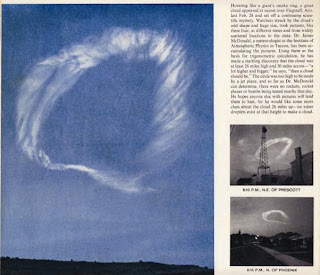 “…a great cloud appeared at sunset over Flagstaff, Ariz. last Feb. 28 and set off a continuing scientific mystery.”

“…‘the cloud was at least 26 miles high and 30 miles across – a lot higher and bigger… than a cloud should be’. The circle was to high to be made by a jet plane, and so far as Dr. McDonald can determine, there were no rockets, rocket planes or bombs being tested nearby that day.”

“No water droplets exist at that height to make a cloud.”

“That’s what the attraction is. The predestinated Seed of God who can’t do nothing else but follow It, means more than life to us. Take our lives, but you don’t take That. What is the attraction? God, as usual, fulfilling His Word.”
~ Rev. William Marrion Branham
(65-0725E “What Is The Attracion On The Mountain?”)