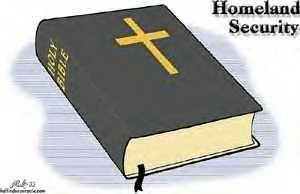 I opened my Bible to Amos chapter 9 this morning and read it carefully, trying to catch as many nuggets from it as I could. When I finished reading it I realized the prophecy that God was giving through the prophet Amos was very obvious:

Israel was going to be scattered from their homeland, and almost utterly destroyed. Then they would return home, never again to be taken from the land God had given them.

God was going to “sift them among all nations“, (vs9) and all the sinners of His people would “die by the sword” (vs10). But before “the house of Jacob” was utterly destroyed (vs8) He would “plant them on their land” and they would “no more be pulled up out of their land” which He gave them (vs15).

So this chapter started my thought process; ‘All these prophecies are so plain – “a virgin shall conceive” and she did’. On and on we could go with prophecies that have obviously been fulfilled that were so plainly stated in the Scripture that we wonder why the people in each age couldn’t see it.

Then I began to realize that prophetic hindsight is easy… But to be so in tune with the Spirit that you can see the spiritual aspect of what’s going on around you every day is what we miss.

How I’ve often wondered so many times why those who were so closely associated with Bro Branham couldn’t recognize that he was a prophet-messenger. So many of them left him who had been associate ministers in his meetings, managers of his campaigns, and bossom friends who were right by his side during the miracles that the Lord did through his ministry, and those who saw vision after vision come to pass and never fail. Why couldn’t they see it?

I’ve referred to the following quote many times in discussions with different brothers and sisters and I found it today while searching some quotes.

RECOGNIZING YOUR DAY AND ITS MESSAGE JEFF, IN 64-0726M
Everywhere now there’s no revival. Everybody’s complaining, ministers crying. I was reading one of the–the outstanding papers that comes here to the church, a very fine paper. And I know the editor, and I know the people. And they’re godly people, very fine, Brother and Sister Moore, of the “Herald of His Coming,” one of the finest papers on the field, “Herald of His Coming.” But they hardly will print anything unless it’s about, “Fast, pray, fast, pray. Sound a trumpet. Get…” How many reads it? You know, you see it all the time. “Fast, pray, fast, pray!” That’s all you hear. “Fast, pray. We’re going to have a great breaking of the day. There’s a great thing going to happen. All of you pray, pray, pray. We’re not too late yet.”
Why do they do that? Why do they do that? They want a great awakening. They’re crying, believing that there will be awakened. They’re good people. Why is it? What have they done? They have not recognized the awakening of the Bride. See? By being a Christian they feel the pull of the hour, but they haven’t recognized what’s been done. That’s what’s making them feel that way. They know something’s supposed to happen; but (See?), they are looking for it way off in the future to come, when it’s already happened right by you.

God help us not to miss the prophecies for our day because we’re waiting for something to happen way off, or looking back to what has already taken place! May we recognize “the awakening of the Bride” is my prayer.

Bro Branham talks about it in this prayer:

WHO IS THIS MELCHISEDEC JEFF, IN 65-0221E
And how many times down through the age when You sent things, people failed to get it. Man is constantly praising God for what He did, and saying what great things He’s going to do, but ignoring what’s He’s doing. So has it been through the age. Why did the Roman church fail to see Saint Patrick as God’s prophet? Why did they kill Joan of Arc when she was a–a prophetess, burnt her as a witch? Father, it’s always past. You hide it from the eyes of the wise and prudent. No wonder You said to them priests, “You garnish the tombs of the prophets, and you’re the one that put them in there.” After they’re gone they see their mistake. They always persecute You, Lord, in whatever form You come in.

I just wanted to share this with you all since it really struck home to me this morning that we need to stay in the Word and ask God to never let us get so focused on prophetic hindsight or foresight that we miss what is promised for our day that is happening all around us.

God bless you all,